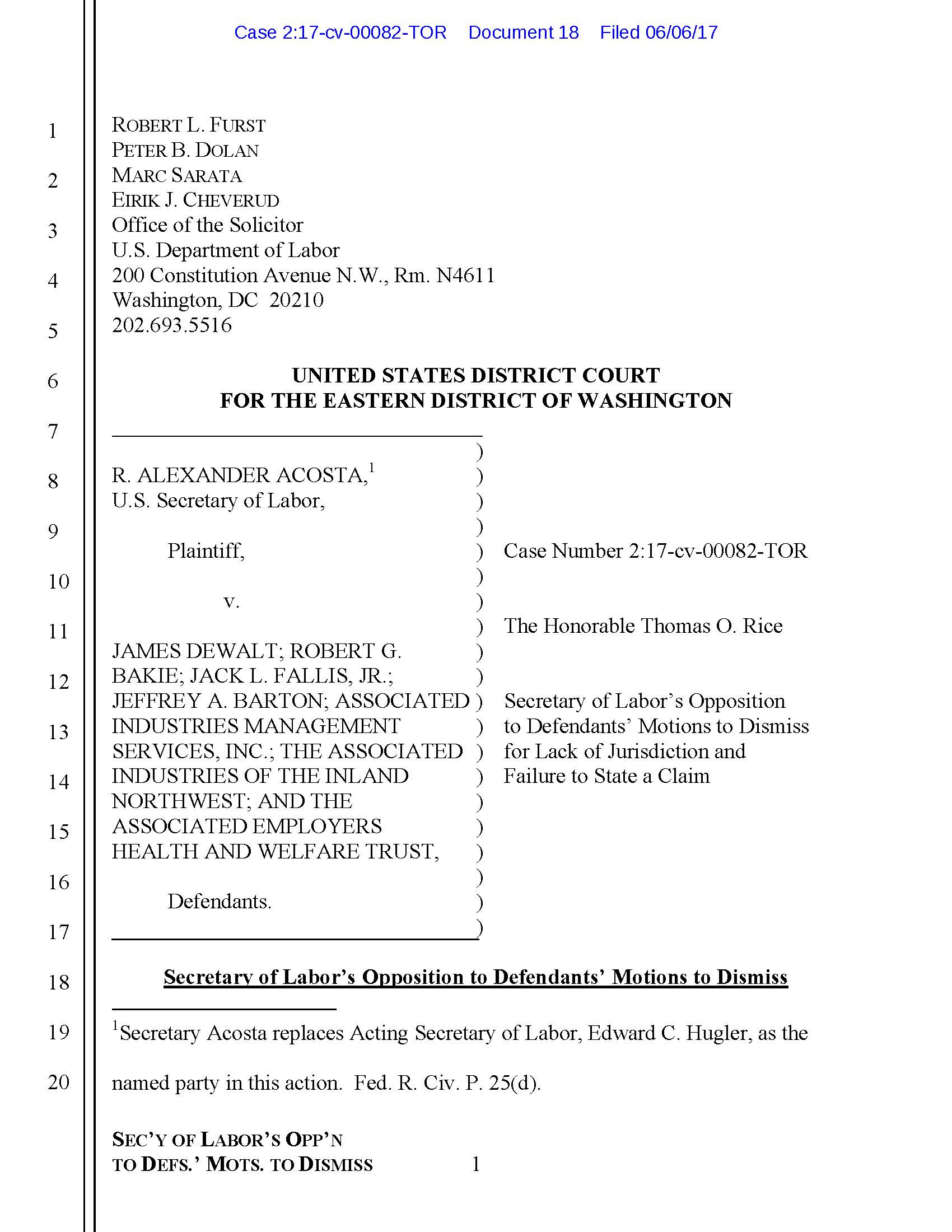 Yesterday, the Department of Labor (DOL) responded to Associated Employers Health and Welfare Trust’s (AET) motion to dismiss the ERISA fiduciary case against the Trust, Associated Industries of the Inland Northwest and Associated Industries Management Services (AIMS). Recall that AET and the other defendants argued that the ERISA lawsuit by DOL should be dismissed because no trust assets were held by the Trust and the defendants were not ERISA fiduciaries.

Citing prior cases and circumstances, DOL reiterated the basic ERISA claims against the parties:

DOL argued that defendants failed to understand both ERISA and their own responsibilities in managing employer health plans.

Defendants’ arguments hinge upon a basic misunderstanding of ERISA. First, when employers and/or employees contribute assets to a multiple-employer trust, the assets held by the trust are plan assets where the ERISA plans, and their participants and beneficiaries, have a beneficial interest in those assets under the terms of the trust, even though the trustee has legal title to them. And someone with authority or control over plan assets, like defendants here, is a fiduciary under ERISA. [Response at 7]

DOL argued at length about the nature of trusts, plan assets, and ownership interests. DOL noted that the Trust has argued both that the participating employers each had their own ERISA plans and that the Association itself was a single employer plan. In either case, DOL asserted:

(1) defendants established a multiple-employer trust in which employers could participate to provide benefits to their employees;

(2) the trust required participating employers to establish their own ERISA plan;

(3) the trust agreement required participating Case employers, on behalf of the ERISA plans, to fund the trust by contributing assets to it;

(4) the multiple-employer trust provided welfare benefits to participants and beneficiaries through insurance policies purchased from third-party insurers; and

(5) the master trust agreements made clear that the assets contributed to the trust could be used only for the exclusive benefit of the plans’ participants and beneficiaries.

In such situations, the law is clear: the trust’s assets are plan assets under ERISA. [Response at 20]

DOL is unlikely to let go of the charges against the Association or individuals believing that fraud and concealment exists. At a minimum, DOL found a failure of the Association to pay attention to and act on known violations of law.

The Secretary has alleged that defendants engaged in fraud or concealment when they failed to disclose the AIMS’ fee increases to employers and their employees, and when they concealed the increases in AIMS’s fees and by taking money from the Trust’s reserves to pay for those increases without telling the Participating Employers or their employees that it was doing so. [Response at 25]

In response to the Association’s argument that DOL was vague in establishing a failure to “monitor” trustees, DOL cited to cases noting that the responsibility for appointing and removing trustees was itself an ERISA fiduciary duty. DOL pressed even harder alleging that:

Whatever the eventual outcome of this litigation, the dispute should reinforce the seriousness of trustee and association health plan obligations. Even if the defendants succeed in avoiding ERISA fiduciary liability, DOL has clearly stated the agency’s expectation in the administration of association health plans and the risk of ERISA “prohibited transactions” that can arise with payments for plan administration by the association’s own affiliate.