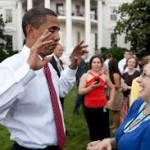 President Obama surprised many folks today by proposing to allow small employers and the self-employed to form multiple employer plans without regard to the “common bond” standard required by the Department of Labor. The elimination of the “common bond” requirement would eliminate one of the highest hurdles to the creation of group benefit programs for independent contractors and sole proprietors.

“Multiple employer plans (MEPs) already allow employers with a “common bond” to form a pooled retirement plan, offering benefits through the same administrative structure but with lower costs and less compliance burden than if each employer offered a separate plan. In his upcoming Budget, the President will for the first time propose to remove the “common bond” requirement, enabling employers to take advantage of “open MEPs” while adding significant new safeguards to ensure workers are protected. As a result, more small businesses should be able to offer cost-effective, pooled plans to their workers, and certain nonprofits and other intermediaries will be able to create plans for contractors and other self-employed individuals who don’t have access to a plan at work. As an added benefit, if an employee moves between employers participating in the same open MEP, or is an independent contractor participating in a pooled plan using the open MEP structure, he can continue contributing to the same plan even if he starts work for a different company.” [Emphasis added, White House Press Release 01/26/2015]

In case you missed previous articles on MEWAs posted on this website, I offer the following contrast to the President’s statement so you may grasp the enormity of the President’s proposal.

In 2012, the DOL rejected a multiple employer retirement plan proposed for unrelated employers:

“Specifically, you ask whether the Department of Labor (Department) would view the Program as a single “employee pension benefit plan” within the meaning of ERISA section 3(2) where multiple unrelated employers adopt the Plan to provide retirement benefits to their employees…

Based on our review of the information provided, there is no employment based common nexus or other genuine organizational relationship that is unrelated to the provision of benefits between Advantage or TAG and the employers of employees that benefit from the Plan, or among the different groups of employees that participate in the Plan.2 Rather than acting in the interest of an employer with respect to the Plan, Advantage and TAG appear to be acting more as service providers to the plan, much like a third party administrator or investment advisor…

In your submission, you urge that the Department’s historical interpretation of “employer” under section 3(5) of ERISA regarding multiple employer welfare arrangements (MEWAs) should be restricted to welfare plans and that a less restrictive interpretation be applied to retirement plans. The Department is of the view, however, that the term “employer” should have the same meaning in this context whether applied to the term welfare plan or pension plan. See Sullivan v. Stroop, 496 U.S. 478, 484 (1990).” [DOL Opinion AO201-04A]

Naturally, the President’s proposal implicates longstanding federal rules that have prevented millions of people from participating in the kind of group health and welfare benefit programs enjoyed by full-time workers at large companies. This mobile workforce has an official name – “Contingent Workers” – defined by the Bureau of Labor Statistics as “workers who do not have an implicit or explicit contract for ongoing employment.” This past year, the Government Accountability Office (GAO) estimated that up to a third of the labor force could be considered “contingent” depending upon whose definition gets used. Among GAO’s reported findings:

Compare the President’s proposal to the ongoing war over association health plans in Washington State. You’ll be forgiven for suffering cognitive dissonance.

The difference between the President’s retirement plan proposal and Washington State’s longstanding authorization of small group association health plans can be explained when you remember that small employer aggregation through associations was adopted when Washington State’s comprehensive health care reform project was repealed. The principles for promoting retirement plans and health plans through multiple employer plans are exactly the same unless you need small employers and individuals to chip in and pay the health care costs of those in poor health.